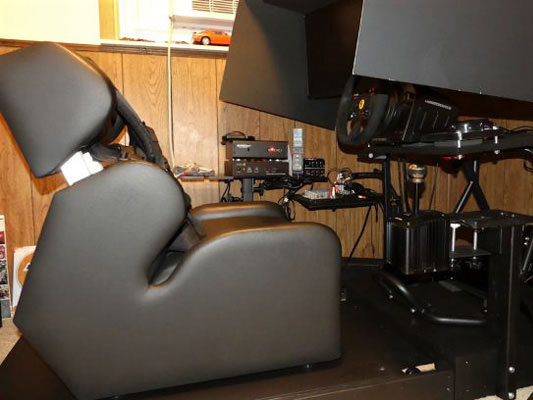 "I’ve been playing pc racing games for 21 years and it is by far my favorite hobby so when I find something that is a game changer I like to share.

For the past few years I’ve been using a buttkicker so I can ‘feel’ the car along with road surfaces either through the sound or telemetry of the sim but I wanted more immersion so I recently bought a Geko GS-105 motion seat and now I need to share with others who might be thinking of going to the next level (next level of immersion not the next level seat mover, lol).

Playing pCARS with the G-Seat has been incredibly awesome. Feeling the forces of acceleration and braking, feeling the bumps, dips and cracks on any given straight away, feeling the side forces produced when cornering while at the same time feeling the effects of hitting the curbs and/or rumble strips in those same corners is just simply awesome. What I just mentioned is what I feel with the G-Seat and adding the buttkicker to the seat seemed to fill in some gaps and it’s a match made in heaven.

Adding the G-Seat to my rig has been interesting as I had to re-work just about everything but it is without a doubt worth every swear word I said and thought throughout the whole process. I also feel the need to mention that I wasn’t 100% happy when I first got the G-Seat as I didn’t like what I was feeling when cornering but it turned out I had 2 things wrong. First I didn’t have the harness on the G-Seat properly adjusted, second I was not in the proper ‘mind set’ when driving a sim as I was letting the G-Seat move me around instead of me fighting the forces trying to stay still. After taking a long road trip concentrating on what my body was doing to keep still when taking corners at a high rate of speed I went back to my G-Seat and applied what I remembered and now I’m 110% happy. It’s quite a ‘core’ workout resisting the forces lap after lap. I now can relate to (well most of) this story “You think driving an Indy car is easy?” Of course the severity of forces depends on what car is being driven and the settings within the G-Seat software (a lot of adjustability within the software).

So anyway if you are thinking about going to the next level of immersion I highly recommend the Geko GS-105."